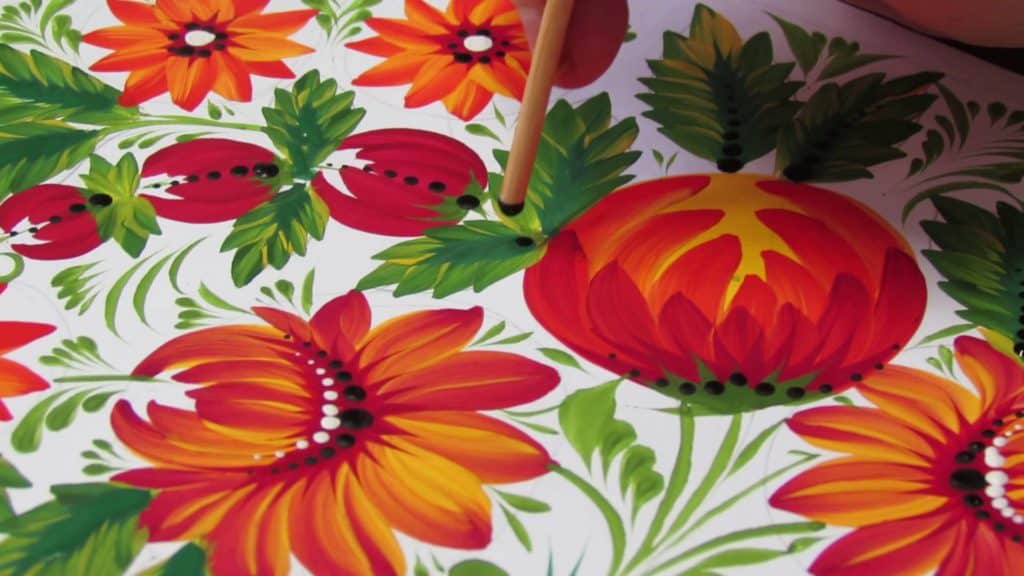 Originating in the village of Petrykivka in Dnipropetrovsk Oblast, the Petrykivka style of painting is one of Ukraine’s unique and treasured forms of ornamental folk art which is still practiced around the country today. Characterized by the colorful flowers and lush foliage found in the area, Petrykivka is used to decorate a wide variety of items, both practical and decorative. The founding of the village of Petrykivka dates back to the late-18th century and people living there decorated the exterior and interior of their homes, as well as the items in them, extensively with the form of painting that came to be known as Petrykivka or Petrikov. Walls, stoves, furniture, plates, kitchen utensils, musical instruments and other items would become skillfully crafted works of art.

While initially the subject matter for paintings included flowers, foliage and fruit, artists later started to add butterflies and birds, with roosters being among the most popular. In addition to being pleasing to the eye, Petrykivka is rich in symbolism and meaning. The rooster, for example, symbolizes fire and spiritual awakening, while birds in general denote happiness and harmony. Having these painted elements in the home is believed to protect the household from evil and sorrow.

A Petrykivka artist needs a steady hand and an eye for detail as all painting is done freehand using a very fine brush and without the aid of sketches and measuring instruments. Also, some of the surfaces being painted on are awkward shapes, requiring intense concentration and accuracy. This skill is still passed on from one generation to the next in the village of Petrykivka, and every household generally has at least one artist carrying on the tradition. Also, local schools teach the basics of Petrykivka, allowing children the opportunity to discover and develop their talent.

Although the village of Petrykivka is acknowledged as the origin of this unique style of decorative painting, it is practiced in many villages around Ukraine. Styles may differ to include local natural elements, but the fundamental elements remain the same. Visitors to Ukraine may want to take some Petrykivka adorned items home as a memento of their visit to this fascinating country.